a, colossal, common, failure, of, sense


A colossal failure of common sense 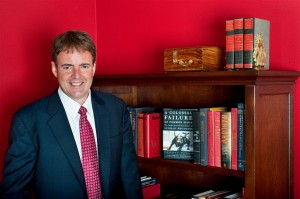 America has two distinct groups of people: Wall Street and Main Street – the financial plumbers, and those who have only the most basic notion of the ebb and flow of economics. Wall Street, with the collapse of Lehman Brothers in 2008, was the epicenter of the worldwide financial crisis that brought the global economy to its knees.

My objective in writing A Colossal Failure in Common Sense was twofold. First, to show Main Street how markets really work. Second, to provide a crystal clear explanation of why the fabled merchant bank, Lehman Brothers, met with such a swift and brutal end. The lessons are important, not just to warn of such disasters in the future. But ultimately to provide a beacon, to help us serve Main Street better.

They stand alone – the zillion-dollar questions of the financial crisis: What the hell happened at Lehman Brothers? And why was it allowed to fail, with aftershocks that rocked the global economy? In this news-making, often astonishing book, a former Vice President of Lehman gives us the straight answers – right from the belly-of-the-beast. Larry McDonald is the first senior Wall Street trader ever to write such an exposé – revealing at last the culture and unspoken rules of the game like no book has ever achieved before. A Colossal Failure of Common Sense is a human story of McDonald’s rise from a Massachusetts project, to the New York headquarters of Lehman Brothers, home to one of the toughest trading floors in the world. He posed as a pizza delivery man to get past receptionists, to score interviews at brokerage firms. He peddled frozen pork chops, door to door, to hone his sales skills, desperate to realize his dream of working on Wall Street.

We get a close-up view of the other participants in the Lehman collapse, those who saw it coming with a helpless, angry certainty. We meet the Brahmins at the top, whose reckless, pedal-to-the-floor addiction to growth finally demolished the nation’s oldest investment bank. The Wall Street we encounter is a ruthless place, where brilliance, arrogance, ambition, greed, and all the human traits, combine in a potent mix that sometimes fuels prosperity, but sometimes destroys it. 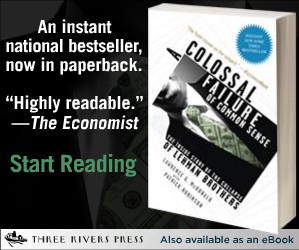 McDonald’s gripping story of the firm’s death spiral is a modern-day thriller, studded with incredible, insider revelations no one else knows, or would dare to reveal. The collapse of Lehman Brothers was no surprise and didn’t have to happen. In fact, CEO Richard Fuld and President Joe Gregory were confronted with warnings on three occasions – starting as far back as 2005 – that the property market, on which they were betting the ranch, was teetering toward collapse. Fuld and Gregory turned their backs each time.

McDonald paints a vivid picture of life inside Lehman, where the isolated and reclusive chief executive ‘reigned’ in his sumptuous 31st floor office, accessible only by a private elevator. From this Ivory Tower so much of the firm’s brightest talent was driven out of the door. The full significance of the Lehman bankruptcy remains to be measured. But this much is certain: it was a devastating blow to both America and the world beyond. And it need not have happened. This is the story of why it did.

…never been so poignantly told

The story of the bank’s journey to its grave has never been so poignantly told as in A Colossal Failure of Common Sense… While the crisis has spawned many books, McDonald’s is among the first from an insider and is the front-runner on the subject of Lehman. He witnessed, often in amazement and disgust, the corporate dysfunction and hubristic leadership that lead to the bank’s demise.”

Mr. McDonald’s book gives the reader a visceral sense of what it was like to work at Lehman Brothers and the fateful decisions and events that led to the company’s death spiral – decisions that turned the once-proud firm into a grim illustration, in the words of one of the author’s colleagues, of the “colossal failure of common sense…”

…McDonald, a former Lehman trader, presents a scathing inside account of how the Wall Street securities firm became a house divided. It’s framed as a breathless thriller, yet packed with invaluable insights.”

…A Wall Street insider and former Lehman trader reflects on the collapse of the nation’s oldest investment bank, a venerable vessel run aground by executives with a reckless addiction to financial leverage and a simplistic grasp of structured finance.”


A colossal failure of common sense

Comments Off on A colossal failure of common sense